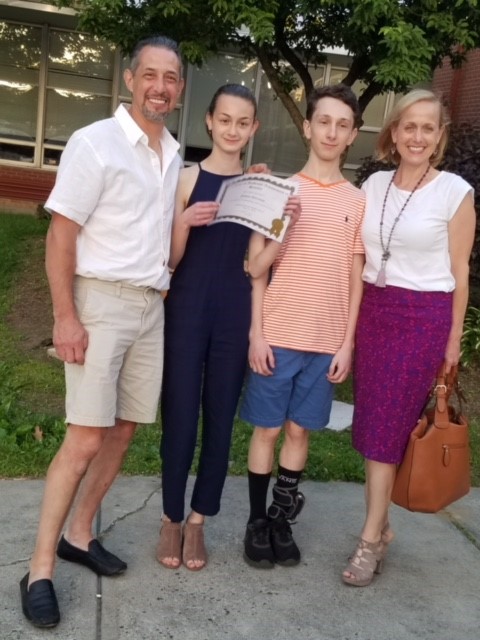 In June 2016, Christy Jefremow was by all accounts a healthy, fit, and highly motivated 48-year-old woman training for her 12th marathon. It is an elite club of runners that can make it through 11 marathons and want to take on a 12th. As she began her marathon training regimen this time, she felt a bit more tired than usual, but she chalked it up to age and kept her eye on the finish line. She also began to experience light and unusual spotting two weeks after her period, and decided to make an appointment with her OB-GYN. That doctor visit became a life-changing event.

Christy was diagnosed with uterine and primary peritoneal clear cell carcinoma. Her OB-GYN conducted a uterine biopsy that diagnosed the uterine cancer. A CT scan revealed that she had two additional tumors – one behind her rectum and one fused to her rectoid sigmoid junction.

“I was in complete shock,” says Christy, a wife and mother of two teenagers. “I was feeling relatively healthy so I thought ‘they must be talking about someone else!’”

But the reality began to set in, and more tests had to be done. Due to her diagnosis of two primary cancers, Christy’s doctors also recommended genetic testing. This testing revealed she also has Lynch Syndrome, an inherited condition of mismatched repair gene mutations that cause cells to convert faster to cancer than someone without the syndrome, which puts her at a higher risk for more cancers and recurrence.

“I was advised by doctors as to what the treatment options were,” she says. “But, ultimately, the decisions were mine to make.” She was treated at Smilow Cancer Hospital at Yale New Haven where she underwent a full hysterectomy including removal of uterus, ovaries, fallopian tubes and omentum. Her surgeons also had to remove her rectum and sever her colon at the rectoid sigmoid junction resulting in having an ostomy pouch for five months. She then began her chemotherapy, the first three of six rounds of treatment.
Since primary peritoneal clear cell carcinoma is a highly aggressive form of cancer, Christy was then sent to a radiologist for consultation to see if radiation would work in conjunction with her chemotherapy treatment. The radiologist recommended 25 rounds of radiation even though she could find ‘no shred of evidence that radiation would work’ and all she could guarantee was ‘permanent colon damage and probably the ostomy bag for life.’ Christy was brought to tears, declined and walked out.

She finished her remaining three rounds of chemotherapy after which she was declared cancer-free. It will be two years in November that she is cancer-free.

“Thankfully, I had the good fortune of having many friends, coworkers and family members to help me and my family with emotional support,” Christy reflected. “It was amazing to me how much people really do care, the amount of people who showed up, called, and chipped in with rides, meals and so many other details of daily life. Some of whom I’d never even met.”

Cutting-edge procedures and medicine, innovative scientists and compassionate caregivers were the key to Christy’s treatment.

“I am indebted to Bill Raveis for facilitating my introduction to Damon Runyon and helping to guide me to the best treatment facilities and the best doctors for Lynch Syndrome cancers. These doctors saved my life.”

“Cancer is sneaky and it is imperative that we fund cutting edge research to find cures,” says Christy. “I believe that if it wasn’t for work being done at organizations like Damon Runyon, there would be no treatment for me if the primary peritoneal cancer comes back.”

When Christy was first diagnosed, she was told primary peritoneal cancer had a high recurrence rate with no cure. Since then, a medicine called Keytruda (Pembroluzimab) has been proven to work on people with mismatched repair gene mutations like Christy has.  “I am relying on progressive thinkers to figure this out as my kids have a 50 percent chance of inheriting Lynch,” she says.

Due to her Lynch Syndrome diagnosis, she is currently being monitored for nine other cancers including recurrence of the primary peritoneal cancer.

She may not be running a marathon this year, but she is proud to take part in something arguably even better, the Raveis Ride & Walk on September 30 to raise funds for the Damon Runyon Cancer Research Foundation.

“A close friend of mine who is a cancer survivor told me ‘cancer can be a gift.’ As horrible as it has been, it has been more amazing to see and hear from people I haven’t heard from in years,” says Christy. “It has strengthened the bond my husband and I share. I no longer worry about the little things in life, and feel so fortunate that I have been given a second chance. The sun seems brighter and colors are more vibrant. I feel a deeper appreciation of everything in my life.”