It’s nearly impossible to drive around Fairfield and Westchester counties without encountering a William Raveis “For Sale” sign, and for good reason. The Shelton-based Realtor maintains 134 offices across nine states and recorded $10.2 billion in real estate sales last year. 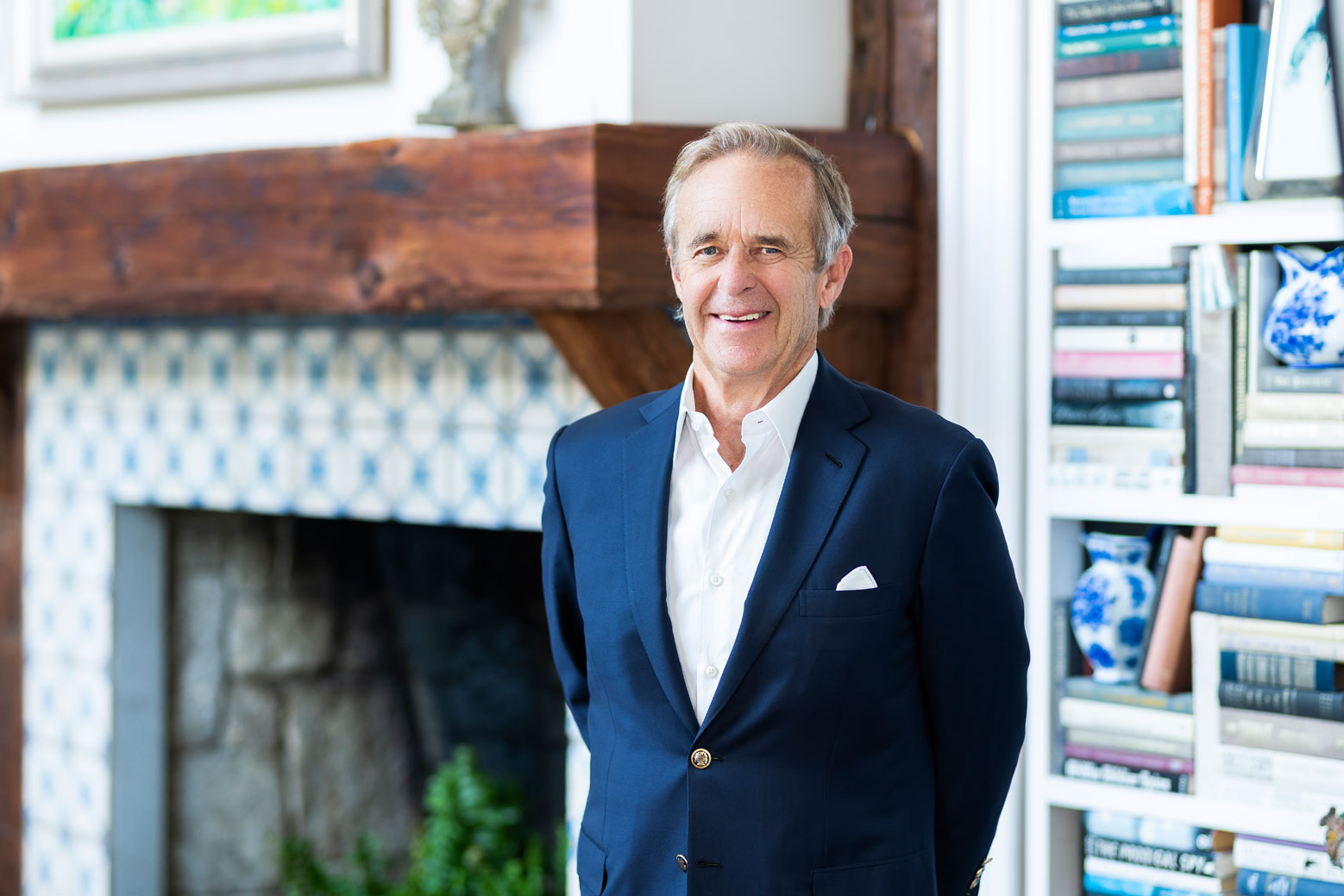 As a result, William Raveis Real Estate (WRRE), Mortgage & Insurance has been ranked the top family-owned real estate company in the Northeast and the No. 9 real estate company in the country by consulting group REAL Trends, and in February received Luxury Portfolio International’s “Top Luxury Brokerage Award” for overall engagement in Luxury Portfolio among 565 brokerages across 65 countries.

In addition, WRRE Co-Presidents Chris and Ryan Raveis were ranked the 36th most powerful and influential real estate leaders on the Swanepoel Power 200, one of the industry’s most closely watched rankings, for 2017-18.

But while the Raveis brothers run things day to day, Founder, Chairman, CEO (and dad) William Raveis is still very much an active presence, splitting most of his time between Shelton and his office in Southport, which is festooned with artifacts from the Revolutionary War, reflecting one of his avid passions.

The senior Raveis, aged 72, was a prime mover behind two of the firm’s latest deals: the June acquisition of Niantic’s Heritage Properties, with more than $150 million in sales volume; and the September joint venture with Palm Beach’s Fite Group Luxury Homes, designed to create what he called “the luxury real estate powerhouse in Florida.”

Raveis recently sat down with the Business Journal’s Kevin Zimmerman to talk about a wide range of topics, from his humble beginnings in Fairfield and his talent-scouting abilities to grooming his two sons to run the business.

Should Chris and Ryan decide to sell after their father is gone, he said, “I’ll come out of the grave and haunt them and their families for the rest of their lives.”

How does one go from starting a small office above a Fairfield grocery store in 1974 to overseeing a $10.2 billion empire?

“I went to corporate America (after graduating in 1967 from the University of Dayton in Ohio with a B.S. in business administration) as a systems analyst at United Technology in Stratford, and after a couple of years left to join Westinghouse International as a senior systems analyst. Eventually, I was responsible for bringing their domestic and international divisions together with technology, overseeing 30 programmers.

“There was a big meeting at the Biltmore Hotel that year with 200 regional vice presidents and the chairman of the board, Don Burnham, never mentioned my name. I thought, ‘I’ve spent five years doing this and nobody says anything? I’m out.’

“My father was a bricklayer and I’d mix concrete for him. I decided I liked the smell of sawdust, so I decided to get into the real estate business by opening the office in Fairfield, which was just a phone and a desk.

“What I decided was, when I was able to start hiring folks, to make them a customer, that the agent is the primary customer. If they don’t make revenue, you don’t make any revenue. My idea was to help them build their infrastructure, get them the right technology. Anything that they are not good at, you do for them.

“I actually think of us more as a marketing and technology company that happens to be in the real estate business.

“Now let me ask you something: What do you think I do?”

“I published a book, ‘The Ten Noble Rules for Business.’ The first rule is ‘be passionate,’ and the second one is ‘be a talent scout.’ At the end are 53 lessons for entrepreneurs. All our managers, and a lot of our agents, have it.”

That presumably includes your sons, who are now co-presidents of WRRE. Was it always a given that they’d join the company?

“I always said that I was not doing this for me. This was always meant to be a legacy company, or I wasn’t going to do it.

“But it was never going to be easy. I introduced them to everything that I was doing, and I asked them to run their own businesses when they turned 16. Chris found out at the end of a year that he hadn’t been paying the right amount of taxes, and he came to me and said, ‘What do I do?’ and I said, ‘That’s not my problem.’

“Another time, Chris was supposed to paint the outside of this building, which was built in ’86. He decided that, instead of using brushes, it would be easier to spray-paint. Well, it was a windy day that day and all the cars in the parking lot ended up getting spray painted. When he came to me, I said, ‘That’s your problem, not mine.’ He said, ‘But I’m not going to make any money!’ ‘That’s your problem, not mine.’ ”

Good lessons, I’m sure. But I know that Ryan spent several years at other companies, American Mortgage Services and Forrester, while Chris worked at Jones Lang LaSalle, and they both worked at Home-Link Services. Chris returned to WRRE in 2003, and Ryan followed in 2005.

“There was some gentle pushing on my part. But I told them they couldn’t come work here until they were 30, that I wanted them to get some experience before they joined the company. But ultimately it was their choice. As it turns out, they’re as good as they get. They understand it. They get it. They have the integrity you need. It’s worked so far!”

That you’re a family-owned and -run company makes WRRE something of an oddity in today’s real estate market, doesn’t it?

“We’re the only family business left of any note in the Northeast, and the second-largest, family-run business in the U.S. Everyone else is either owned by Wall Street or is a small, mom-and-pop firm. And now you have all these cockamamie things coming along, like Purple Bricks, where you have virtual agents that you ‘meet’ with on the phone. They’re running nail salons in the morning and real estate in the afternoon. How do you buy a house when you never meet somebody?

“It’s all funded by Wall Street, taking a traditional business and putting lipstick on it. But we are the most innovative company ever (in real estate), especially with our background in technology, hands down. Nobody else is even close.”

I know that another important part of what you do is the annual Raveis Ride + Walk fundraiser for cancer research, which this year took place on Sept. 30 in Norwalk. How did that come about?

“Somewhere around 25-30 years ago, Carolyn Deal, who was the president of the company at the time, was diagnosed with breast cancer and wound up having a double mastectomy. I’d never thought about breast cancer before, but we stood by her as she went through the surgery and came back to work. She went through a lot.

“That underscored for me that there’s something bigger than us. We got involved with cancer research, breast cancer in particular, and put a portion of our earnings aside for donations.

“Then four or five years ago, my wife was diagnosed with acute myeloid leukemia and was given four months to live, which got me to thinking about what we could do for all cancers. I did some snooping around and found (the Damon Runyon Cancer Research Foundation in New York City), which has 12 Nobel Prize winners as part of its research team.

“And my wife, who was given four months to live, is now in her fourth year (since being diagnosed), thanks largely to the different protocols, drugs and procedures that we have now that we didn’t have five years ago.”

“Growing up here was terrific. We lived in Bridgeport until I was 14, in a two-family house that had no hot water. Then we came to Fairfield and I was able to have a shower with hot water and live in a house that had heat, which was amazing.”

What led to the move from Bridgeport?

“My father and mother wanted me to succeed. The school system was better (in Fairfield), and I ended up being the first in the family to graduate from college.

“It was real ‘American Graffiti.’ The kids were great, the schools were great, I was playing football. It was just beautiful. Everything about it was terrific.

“Then I got married, had kids and we stayed in Fairfield. It’s still a great community with great resources.”

Statewide, though, there are still some major economic issues.

“There have been a number of political missteps made. It’s a less business-friendly state than it used to be. I’ve never been involved in politics, but I am now. I’m on (Republican gubernatorial candidate Bob) Stefanowski’s committee. I have a meeting with him every Thursday. (Over the summer it was reported that Raveis and his wife Candace wrote a $3,500 check to the Stefanowski campaign.)

“I just want pro-business policies brought back to the state, back to where it used to be. There is no CEO out there who’s 50-plus years old who wants to move his company here and deal with the income and corporate taxes.

“That’s got to change. My kids’ kids are going to be paying for the deficit we’re in now, some day.”

What do you like to do with your spare time?

“We used to travel a lot, although because of my wife’s illness we’ve tamped that down. We’ve been all over the world. There’s also golf. Right now I’m studying comparative religions, which I really enjoy. It’s another way to learn about people. Do I espouse one particular religion? No. But Buddhism is really pretty cool.”

Is there a particular business book out there that you’d recommend?

“I find most of them pretty boring. They’re all corporate related and I’m more interested in what motivates people. Why do people do the stuff they do? And I like to treat people the way they want to be treated, which is essentially what Confucius, the Buddha and Jesus all said. I find it fascinating that they all came up with the same message while living in different parts of the world.”

“I like the tearjerkers, stories about how people overcame obstacles. ‘Schindler’s List’ comes to mind, which was pretty dark, but also pretty triumphant.”

“There’s nothing good on. Maybe I’ll watch the National Geographic channel, or ‘Nova.’ All the other stuff is boring to me. Even the TV news today is a little biased.”

Best restaurant in the county?

Liana’s Trattoria (in Fairfield). It has the right personal touch. They make their own pasta. It’s just like being in your Italian grandmother’s house. My wife and she are very good friends, and they serve vegetables that they mark on the menu as ‘from the Raveis garden.’ ”

What led to your interest in Revolutionary War memorabilia?

“My wife has been antiquing for years and about 10 to 15 years ago we ran across a store that had some American Revolution items, which I got interested in. They told me that they’re impossible to collect, which was enough for me to go out and start finding things.

“Eventually I found Bill Guthman, who was a big Revolutionary War collector (Guthman died in 2006). He had a collection in his cellar that was about 3,000 square feet, with stuff on top of stuff, all of it of great historical significance. I offered to archive it for him, but on the condition that I could buy the best things.

“Today I have the only drum from that era in private hands, Paul Revere’s wallet, Hancock’s enlistment papers. All together there’s probably about 500 items. I have a rifle here that was one of the first to be made in America. Everything else was imported from France.

“And when you think about it, what was the Revolution about? They didn’t like the way they were being treated, and it exploded from there. And we’re here because of all these people. It’s an honor to have some of the stuff from these great entrepreneurs.”