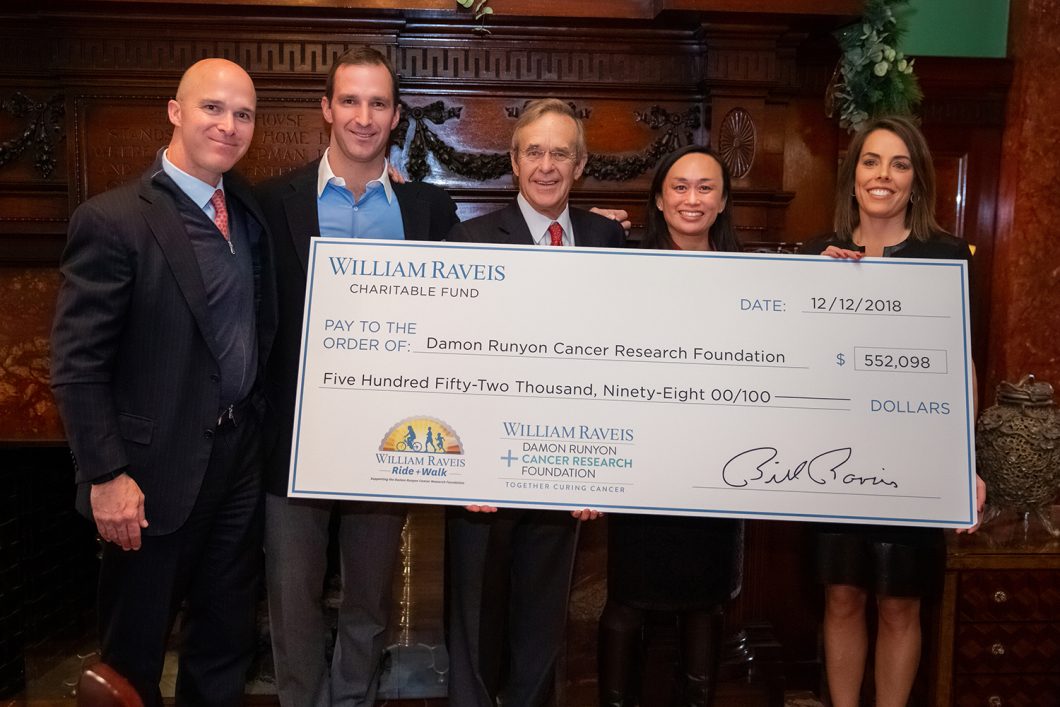 The William Raveis Charitable Fund (WRCF) surpassed their goal and raised a record $552,098 this year for the Damon Runyon Cancer Research Foundation (Damon Runyon), which funds the most promising scientists conducting cutting-edge research to find a cure for cancer.

Among the regional fundraisers throughout its nine-state footprint, William Raveis Real Estate (WRRE) offices in Massachusetts held 10 fundraisers in October and November, raising nearly $80,000. WRRE agents in Mass., Conn., Vt. and Fla. also sold nearly 8,000 raffle tickets at $10 apiece for a chance to win a grand prize trip to Spain and Portugal. 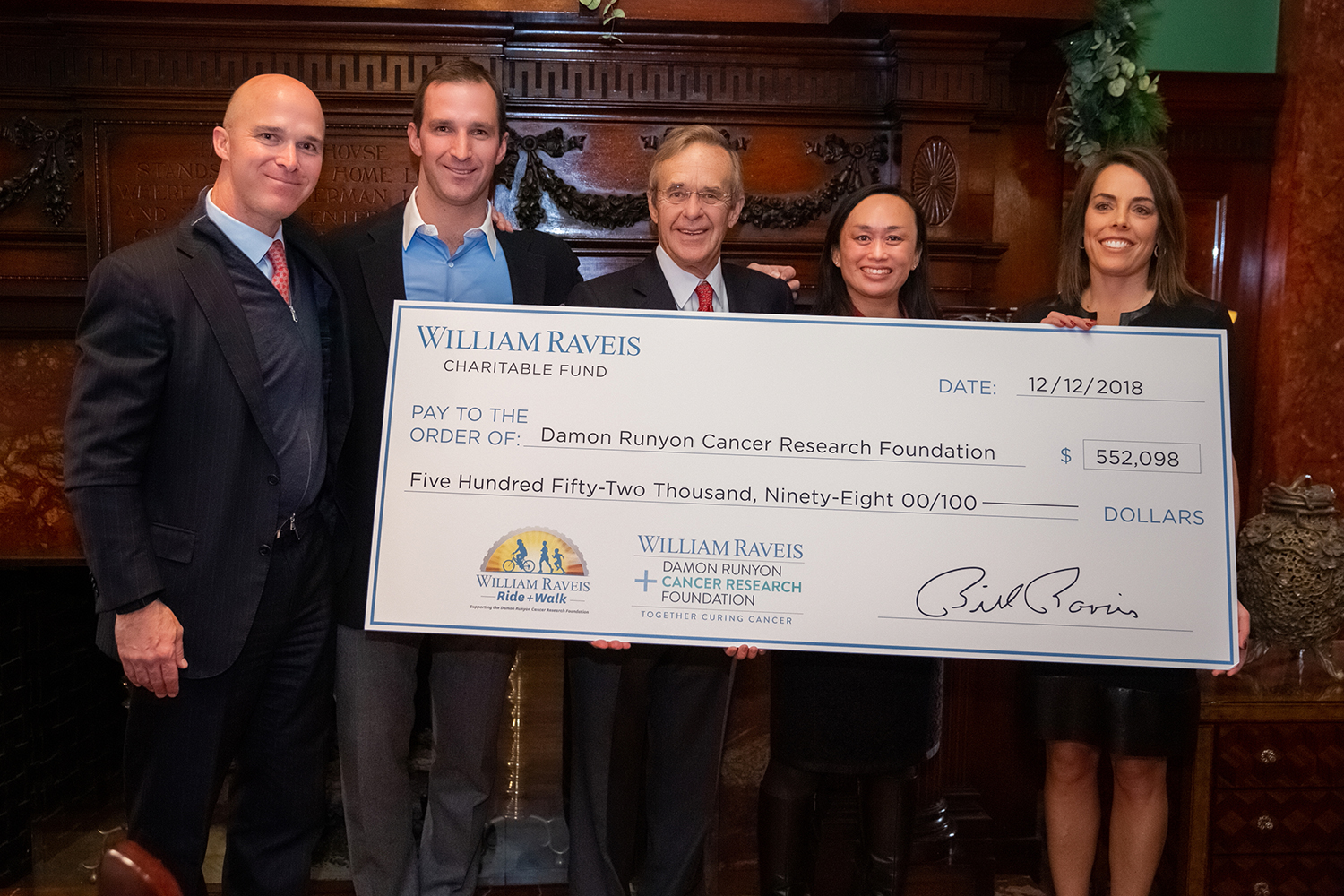 Since 2015, the William Raveis Charitable Fund has raised more than $2 million for Damon Runyon and has funded 14 scientists who are researching eight different types of cancer at eight different institutions in Connecticut, Massachusetts and New York. Damon Runyon identifies the brightest early-career scientists with innovative research ideas and provides them with funding to pursue new ways to prevent, diagnose and treat all forms of cancer. Since 1946, Damon Runyon has invested more than $340 million in more than 3,650 exceptional scientists. Their alumni include 12 Nobel Laureates and leaders of major cancer centers across the United States.

“We are honored and humbled by our community’s commitment to funding cancer research and surpassing our fundraising goals this year,” said Meghan Raveis, the director of the WRCF. “Our offices banded together to create events filled with energy, passion and optimism — and proved that together we can make an impact in funding the country’s most innovative and brilliant scientists who are on track to one day find a cure for this devastating disease.”

The top fundraising event in Massachusetts raised $18,181 for the DRCF on November 8 at the Hyannis Yacht Club and was attended by more than 150 people, including agents and clients in all 10 Cape Cod offices and Nantucket. This annual fundraiser included a raffle and a silent auction of more than 100 items donated by agents and local businesses. Two Damon Runyon fellows from Harvard Medical School, Drs. Natasha O’Brown and Sarah Pfau, spoke at the Cape Cod event about their brain cancer research.

More than 325 people came out to support the Jo’s Grant fundraising event on October 16 at Steel & Rye in Milton. Held in memory of Jo Grant, a top producing William Raveis agent who passed away last spring from melanoma cancer, the event drew many of her friends and family, as well as the extended WRRE community, and raised nearly $18,000. James Beard Foundation award winner and celebrated chef Lydia Shire also attended the fundraiser and donated a dinner for 10, prepared in the winner’s home, which they auctioned off on Facebook after the event.

“It was an amazing turnout. Jo was beloved by so many. It was so special introducing Dr. Megan Insco of Damon Runyon to Jo’s family,” said Beth Rooney, the manager of the Milton office who organized the fundraiser. Dr. Insco, a fellow at Boston Children’s Hospital and one of the doctors the WRCF funded in 2017, spoke about the latest in advanced melanoma treatment research. “Megan told me how overwhelming it was to see over 300 people gathered to support what she does on daily basis,” added Rooney.

WRRE’s offices on the South Shore of Boston — Hingham, Cohasset, Norwell, Scituate, Plymouth and Duxbury – joined forces to raise $12,251 at an event at the Marshfield Country Club on November 7. Dr. Lindsay LaFave, a Damon Runyon fellow at MIT, spoke about her research of lung cancer, and Richard Murphy, a cancer survivor and Cohasset agent, shared his story.

The WRRE Boston Back Bay, Boston South End and Andover offices held their inaugural event at the Blackmoor Tavern Restaurant in Charlestown on October 17, which drew approximately 80 people, including agents, clients and friends. They raised close to $10,000 from ticket sales, a raffle for a five-day cruise valued at $1,800 and a silent auction of 30 high-end items.

“These events are such a wonderful way for our family of agents to work together and make a difference,” said Wendy Beaulieu, Senior Vice President of WRRE, who helped organize several of the events. “Whether it’s ourselves, a close friend or family member, we have all been touched by cancer.”

Earlier this fall, the William Raveis Charitable Fund’s biggest event, the Raveis Ride + Walk, held at Calf Pasture Beach in Norwalk, Conn., attracted more than 650 people who rode 12, 25 or 50 miles, walked a 5K or participated in family activities. The family-friendly event was topped by a lively, crowd-favorite performance by The Wailers, the legendary reggae band formed by the late Bob Marley, who died of melanoma.