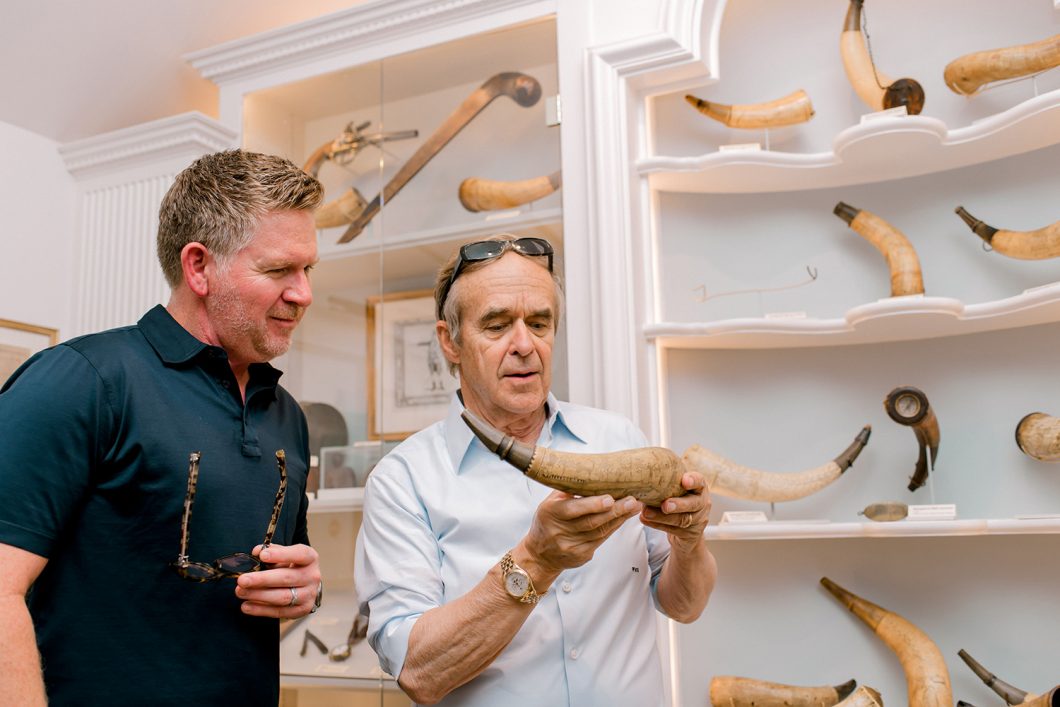 The Museum of the American Revolution announced that William Raveis, Jr., the CEO and Founder of William Raveis Real Estate, Mortgage & Insurance (WRRE), was elected to its Board of Directors today. Over the past 20 years, Raveis has accumulated one of the largest private collections of artifacts from the period of the American Revolution, including some of the finest and rarest pieces made during the conflict with Great Britain. Raveis and his wife, Candace, have lent the museum many historically important pieces and has supported, and continues to support, several of its traveling installations. 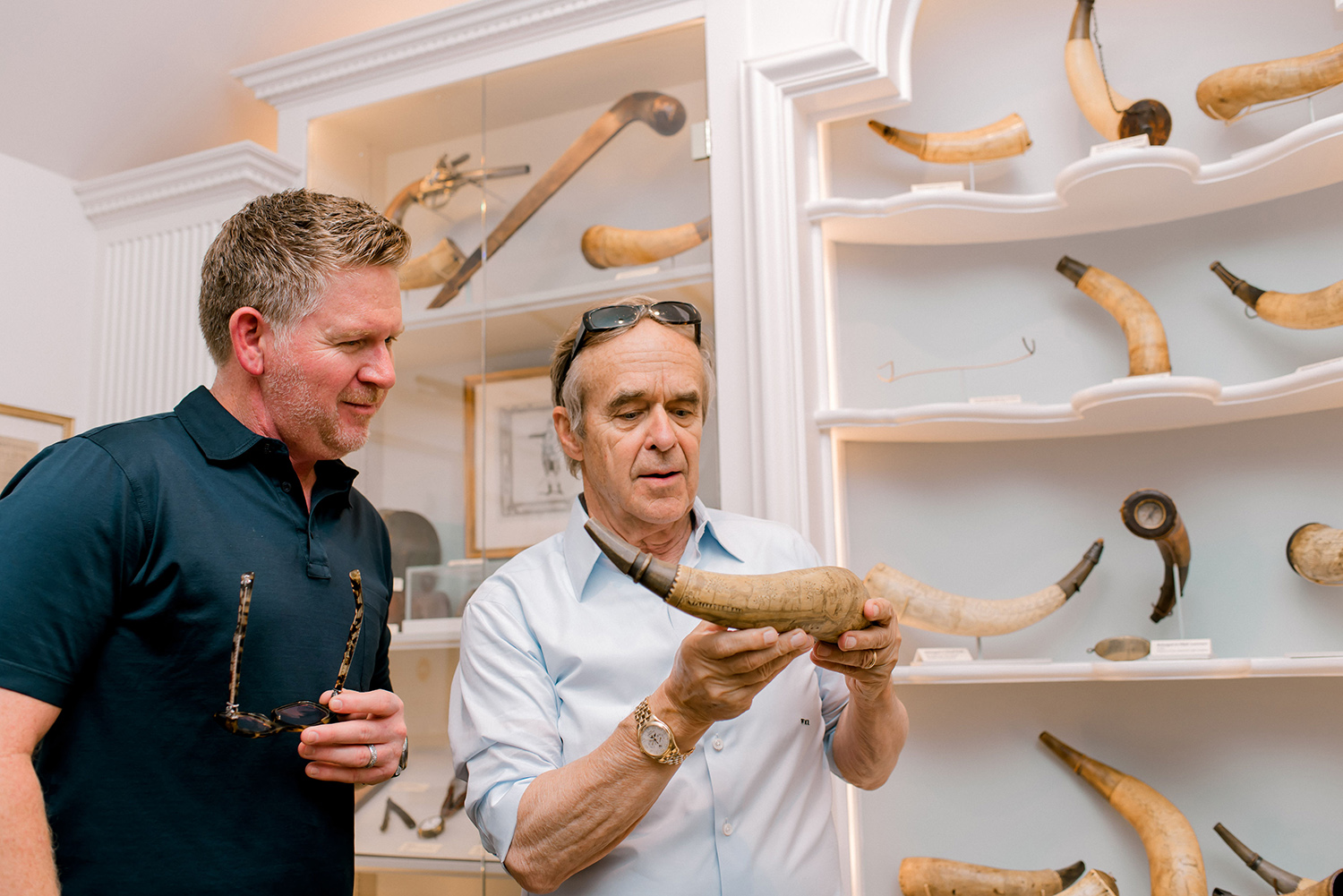 When the Museum of the American Revolution opened in Philadelphia in 2017, Raveis lent five of their most important items to the inaugural exhibition: two exceptional powder horns carved by Jacob Gay for soldiers at the Siege of Boston; one of the few surviving drums from that era; an important musket engraved “TO DEFEND CONSTITUTIONAL LIBERTY”; and a gorget, which is a small piece of neck armor, worn by a British officer with the seal of Great Britain engraved on it.

In addition, Raveis’ collection of 500 pieces includes an original 13 Colonies American flag; a rare cartridge box embossed with the word “INDEPENDENCE;” muskets made for the Continental Army; as well as Revolutionary War documents written by officers and soldiers, official correspondence by the secretary of the Second Continental Congress, and numerous important military commissions including one for John Hancock.

Last February, Raveis underwrote the First Oval Office Project, in which the museum recreated an exact replica of General Washington’s war tent and erected it at their home in Naples, Fla. The tent also traveled to the New-York Historical Society in New York City last summer. The Raveises have also committed to underwriting the costs of taking both the replica of Washington’s tent and his dining tent to Nantucket, Mass., in August 2020, in partnership with the Nantucket Historical Society.

“I have been collecting American Revolutionary War memorabilia for more than 20 years because I believe the men that started our country were the greatest entrepreneurs that ever existed,” said Raveis. “They put their lives on the line, and today, we prosper because of their dedication to life, liberty and the pursuit of happiness. They built this country that we are proud to call home, and that is why it is very special for me to be on the Board of The Museum of the American Revolution.”

He was especially motivated to start collecting when he was told the items were impossible to obtain — mirroring his business outlook of undertaking challenges. Raveis later discovered an antiques dealer and one of the country’s leading authorities on military and historical Americana in Westport, Conn., named William Guthman, who educated him on every item’s historical significance. Every Saturday, Raveis visited Guthman in his home and archived the items in his 3,000-square-foot cellar, and gradually bought pieces.

One of the most innovative residential real estate visionaries, Bill Raveis is the CEO and founder of William Raveis Real Estate, Mortgage & Insurance (WRRE), the top family-owned real estate company spanning the Northeast and Florida and the seventh largest independent real estate company in the United States. Raveis has earned national honors and respect because of his foresight, technological advancements and innovative accomplishments. He was chosen Entrepreneur of the Year from Ernst & Young, was selected as one of The Most Admired Individuals by REAL Trends and has been the recipient of numerous leadership honors and community awards.

William Raveis Real Estate, Mortgage & Insurance is the number one family-owned real estate company in the Northeast and the number nine real estate company in the country, according to REAL Trends. William Raveis, WRRE’s CEO and Chairman, founded the company 44 years ago and has turned it into a real estate powerhouse with more than 4,200 talented sales associates across 137 offices in nine states. WRRE is the only privately held firm offering mortgage and insurance services under one roof to its clients, thereby creating a seamless end-to-end customer experience.

The firm received a family-owned business award in 2019 by Westfair Communications, which owns Fairfield County Business Journal and Westchester County Business Journal. WRRE also received Luxury Portfolio International’s® Top Luxury Brokerage Award for overall engagement in Luxury Portfolio among 565 brokerages across 65 countries. WRRE was named the Most Innovative Brokerage by Inman News, and has consistently been ranked the best place to work by Fox CT, Hearst Connecticut and the Boston Business Journal. For more information, visit raveis.com or blog.raveis.com.

About Museum of the American Revolution

The Museum of the American Revolution uncovers and shares compelling stories about the diverse people and complex events that sparked America’s ongoing experiment in liberty, equality, and self-government. Through the Museum’s unmatched collection, immersive galleries, powerful theater experiences, and interactive elements, visitors gain a deeper appreciation for how this nation came to be and feel inspired to consider their role in ensuring that the promise of the American Revolution endures. Located just steps away from Independence Hall, the Museum serves as a portal to the region’s many Revolutionary sites, sparking interest, providing context, and encouraging exploration. The Museum, which opened on April 19, 2017, is a private, non-profit, and non-partisan organization. For more information, visit www.AmRevMuseum.org or call 877.740.1776.